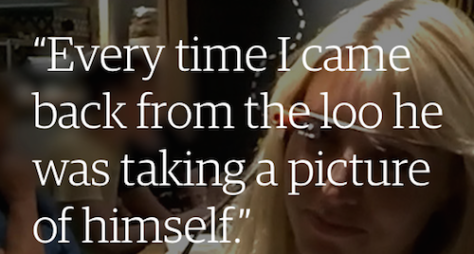 As a companion to their popular – well, I like it anyway – Blind Date series, the Guardian has launched Watch Me Date, a televisual feast that lets you, well, watch two people go on a date.

I can’t embed because WordPress is useless, but why not watch the video while you read my ‘expert commentary’? Watch the video

Next up we have Sarah, who works in music PR and Ian, who has a starring role in his own life, with a digital marketing job on the side.

Ian is after a “bubbly, happy, smiley” lady – he basically wants the Churchill’s Insurance nodding dog in slingbacks.

Sarah says that she doesn’t go on dates thinking “I’m going to marry this man” and then there is a “BUT…” and the ground starts to shake and the skies darken and she ultimately admits she’s after somebody to settle down with. Run, men! Run for your lives! (I joke, of course. Why is it such a passion-killer to admit you are looking for, y’know, the real deal?)

Ian dribbles on a bit about liking a woman who is “driven” and “lovely” – all very interesting. When I came to, Sarah was back on the screen, being *very* specific about the types of trainers her man should be wearing. Like, obsessive-level. Hmm, why are you still single, Sarah?

Ian says he doesn’t normally dress the way he has done for his date. When he describes his usual outfit, it sounds a bit like Taylor Swift going on about Harry Styles’ daydream James Dean look in his eye. A white T-shirt and jeans, Ian? Wooo! I’m so excited.

Sarah asks what his trainer selection is like (?!?!) and Ian instantly fails the test. He likes Converse (high five!) and Redwing boots – what Ian is telling us with these footwear choices is that he knows how to code HTML, that age-old aphrodisiac. Sarah’s face falls and I know – I absolutely know for sure – that it is over for her at this point. Ian’s trusty Redwings will not be slung in the corner of Sarah’s bedroom any time soon.

This goes on and on until I end up wishing that huge Converse that’s the side of that shoe shop in Camden would fall out of the sky and crush them both – just so we can stop hearing about shoes. 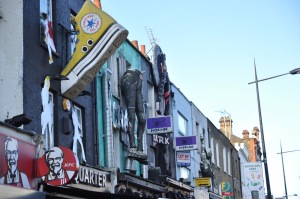 Finally, they move on.

Ian’s top tip about putting your jacket in a BIN BAG when you go to an Indian restaurant is probably well-intentioned, but first of all, it is a totally bullshit, impractical tip and, secondly, it’s delivered like a teacher telling you off for not writing out your homework neatly enough.

You’d think Ian’s grave would be dug deep enough, but he decides to plough on and turn it into foundations for a family mausoleum. Clearly on the wrong end of a few ales, Ian admits he has posted some Instagram selfies during the date, with captions that are hardly going to get him a seat at the Algonquin Round Table.

“Every time I came back from the loo, he was taking a picture of himself,” confirms an incredulous Sarah, before the footage from his Google Glass damns him for ever.

Sarah moans she has dropped her dinner all down herself (mainly, I think, because she cannot think of anything else to say)  and Ian says it doesn’t matter as she’ll be in a dark nightclub later. The world leans in a little closer to the screen awaiting Sarah’s response. When the “Am I?” comes, hands are clasped to eyes, exclamations of horror reverberate around every corner of the land.

This date is the cringe equivalent of eating 10 bags of Tangfastics at once. And there’s still a minute to go. Why would you do this? What is wrong with you?

Sarah eventually asks the question on everybody’s lips, when, after Ian has droned on about his dancing prowess for what feels like aeons, she blurts out: “Are you a real person?”

It looks like all is lost, as Ian flounders while Sarah rips him a new one and the date staggers to its natural conclusion.

When the couple are asked, separately, whether they kissed, I expected snorts of derisive laughter from Sarah and a sheepish head in hands from Ian. However, never underestimate the power of atrocious banta and woeful advice – they snogged. AND to put the tin hat on it, Sarah said she would see him again, but that he hasn’t asked. Incredible.

Boys, you’re doing it all wrong.

no comment
Socks again for Christmas. Liver and onions for tea. That guy asking you out on another date and knowing...

3 Comments
Have you ever been an intern or done work experience anywhere? No matter when you start or where you're...

no comment
Five minutes ago, my date called me a DILF. I heard it quite clearly. It was supposed to be a...

1 comment
Do you remember when Ronan Keating, former lead squawker in Irish quintet of greige Boyzone, launched his career by sitting on...