“Oh goodness, they’re older,” I thought this morning as I scanned  the Guardian Blind Date to make sure it was worth getting up for. I said this as if I forgot the angsty hour I spent in the barber’s chair on Thursday glaring into what I had assumed was a mirror but was in fact a strange Instagram filter that ages you into your forties. One of them is younger than me. I forget I too am older, another box down on the survey. I know a few longer words, but my tiny brain is still the dizzying mess of contradictions and questions it was in my twenties.

And I am sure that Frankie, 47, an education consultant and Bruce, a 40-year-old company director (that should sting a little because I am 41 and not one of these but I guess I could be a company director if I registered myself as one) are exactly the same.

Read what happened and we’ll get busy with the fizzy.

I wish we could do something about this, the tall thing. Why isn’t it OK for a man to be shorter than a woman? In my former life as a heterosexual (hahahahahaha *pause* hahahahahahahahaha) my last ever girlfriend was taller than me to start with, and wore huge heels. Why not? The trouble is both men and women are complicit in this awkwardness. Women aren’t supposed to be interested in short men and men aren’t particularly in being one. And we all go along with it. In the gay world, there is actually a market for shorter gay guys (you may scoff at my saying “a market” but please do open an app and tell me it’s not like a butcher’s window) with some even calling themselves “pocket rockets”. I know. But even that is rare.

Anyway, this ridiculous idea men have to be  taller than any woman in a five-mile radius needs to be dropped. Men go to some ludicrous lengths to conceal their height on dating profiles, and are prone to lying about it. This has always baffled me, because you turn up on the date to discover the “six-footer” you were chatting to (always 6′, don’t ask me why) only comes up to your chest.

Hey Frankie. What a great name Frankie is. Frankie is the kind of name scriptwriters in the ’80s and ’90s used to use for glamorous divorcees or spiky single ladies who wore jumpsuits and big jackets. Frankie. of course, is also that Jason Colby used to call Francesca, American sister of his English wife Sable. Women with troubled pasts, big hair, complicated love lives and an inexhaustible supply of lippy striding into rooms on Howard’s Way – they will always be Frankie to me.

This is the only first impression I ever want to make. Full marks to Bruce here.

Frankie, are you sure he was far away or… well. Bruce says it himself up there, he’s “not the tallest”.

I am wary of “nice smile” or “big smile” because it’s usually printed on the back of a one-way to ticket to the Friend Zone, but I feel Frankie is being sincere here.

What is an actual geek now? I am fascinated by the resurgence of geekdom and how almost everyone is falling over themselves to rebrand as a “geek”. It used to be massively uncool to be a geek, unless you had come out the other side and were now hugely gorgeous and popular. It’s what stunningly attractive supermodels or Hollywood heartthrobs used to say in interviews to make them sound like real people – “Oh I was just an ugly geek” – and you would roll your eyes and go “surrrrrre you were”.

But now being a geek seems to have changed into something else. it is no longer the refuge of the ugly, the friendless, the socially awkward, the bullied and the fanatical. No. Thank GOODNESS, eh, that good-looking people can say with confidence “Hey I’m a geek too; we’re not all lonely weirdos” after being out in the cold for so long. Like there weren’t enough opportunities in literally every other walk of life for the beautiful to dominate absolutely everything. Now you get perfectly toned cuties grabbing a comic, slamming on a pair of Clark Kent specs – £350 Tom Ford ones, though, lol because being a sexy geek costs ££££ – and a T-shirt that says “NERD”, the letters starring against their chest, and claiming geekdom all for themselves.

I had to read this bit over a few times. The Guardian hasn’t seen fit to explain what the hell they were doing on a catwalk, and I can’t be bothered Googling but I would say this is an awkward moment, yes.

Can we talk about prosecco?

Like, what is this “drinking proscecco is an adequate replacement for having a personality” trend?

While I find allegiance to a particular alcoholic drink at least more understandable than caring about 11 strange men you’ll never meet kicking a football round a field – booze gets you pissed after all, which is fun – I have never been able to fathom why drinks like gin and prosecco are supposed to tell us anything about you other than the fact you may well be a nasty drunk prone to arguing in kebab shops. 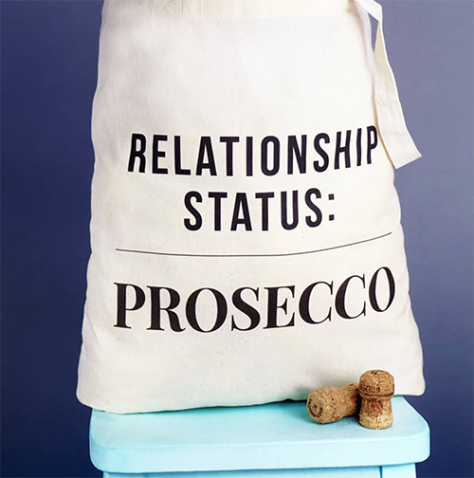 I mean, FFS, prosecco is just WINE. It’s cava with a conservatory and an ensuite. With a bidet. Asti Spumante, but with silver salad tongs instead of wooden. And it’s not even champagne. “Oh I prefer it to champagne,” you hear people say sometimes, before they go on to list some nonsense reason why they prefer a bottle of enamel-eroding, bladder-burning, fizzy migraine to champagne. It is never, strangely, the same answer as mine, i.e. the real one, which would be “I can’t afford it, so £4.99 fizz gives me almost the same buzz and sipping it from a flute allows me to pretend to be Joan Collins”.

“Even during the soup.”

That smile again. Lots of smiling. I have a theory that men say this because it’s the one physical compliment they can give without coming across as  an objectifying, perverted sex dinosaur. In fact, I may just set my phone to autocorrect “nice smile” to “bodacious rack” and see what happens.

I take this answer paired with Bruce’s assertion that Frankie would “blush” at a compliment to mean that Frankie is shy. However, they met on the middle of a catwalk at a festival or something so perhaps she’s not a wallflower all the time. Anyway, Bruce is ballsy enough for the both of them by the sound of it – his very name alone exudes “I will barge past you to get to the bar” – and he’s director of his own company at the age of 40 so he must be doing something right.

ATTRACTIVE, like a fairground attraction, a fatal attraction, or a vase.
FUN, like the idea of going to Alton Towers, rather than the reality.
INTERESTING, like your face when you discover a blond hair on your husband’s sports jacket – yet you are bald.

SMILEY, like fucking hell can’t they think of anything else to say about each other it’s like two people trying to find a way to avoid saying “your teeth are too big”.
CONFIDENT, like the rollerskating woman in the Bodyform adverts years ago.
FUN, like doing half a pill in the queue to get in a LeAnn Rimes concert.

Amazing. This is how you do it.

What? If a person is a 10, score them a 10. Of course someone can score 10 on a first date – why not? There are tonnes of 10s out there – well, tens of 10s, tbh – don’t withhold your top score just because of some weird rule that you just made up that nobody can be absolutely perfect the first time you meet them. In fact, if anything, it’s as perfect as most people are going to get, that all-important first time, when you can see only the good and the exciting – before reality, bad jokes and a habit of leaving towels on the bathroom floor kick in and makes everybody a 5. Call a 10 a 10.

So we’ve come to the end, but will brassy Bruce and beaming Frankie meet up again to see how they get on when we’re not looking?

Don’t be SHY, Frankie – YOU could ask. I worry sometimes we spend so long waiting for other people to do something, to approach us, or be there for us, or help us, or enable us, that we waste a lot of time we could’ve spent moving things forward ourselves. Come on, let’s GO.

Don’t think it, Bruce, make it happen. Before someone other than you and her dentist spots how great Frankie’s smile is…

Photograph: Christopher Thomond for the Guardian

Disclaimer: The comments I make are meant to be playful and humorous and are based on the answers the Guardian chooses to publish, which may have been changed by a journalist to make for better copy.  Get in touch if you want to give us your side of the story. Say cheese!

5 Comments
Let's round off Pride Month with what your horrible sexist uncle with broad fingernails would call 'two birds'. This week,...

5 Comments
In a week where we discovered that not only are cabinet ministers still having affairs like it's the 1980s or...

1 comment
They say youth is wasted on the young, but few things have made me as grateful to be more on...

8 Comments
I can't remember the last time I was so pleased to see two men, apart from that time there was...