Do you remember being bored as a child? It’s a different kind of boredom, isn’t it? It’s an angry boredom, in turns hopelessly lethargic and frustratingly energetic. TV channels are your enemies, your favourite books just dull old bricks, and there is always, always an older relative on hand – usually mum or grandma, but occasionally that auntie who’s got an answer for everything – to tell you that “only boring people get bored”.

Well, wrap that feeling up into two people, send them on a date to some restaurant in Chelsea, have one of them work in PR, and you have today’s Blind Date.

Read what happened on the date with Sarah, a paediatric nurse, and Aled, a PR account manager, both 26, before I look more closely and pour vinegar over everything.

I would say Sarah is already 50% of the way here. You don’t often turn to the Blind Date page and think “Oh hello!” but Aled is quite good-looking in a “would arrive late for Sunday lunch because he’d been watching a sport of some kind” way. But will he charm her? I don’t know about you, but I am on the edge of my seat.

Revolutionary stuff from Aled, there.

Rugby! Knew it. He has one of those faces, and two of those shoulders. He would definitely arrive late for lunch. I bet his mum was forever picking up his rugby socks off his bedroom floor. We all know an Aled.

I am always suspicious of “secret geeks” because it seems to be saying that half the time they are pretending to be cooler than they actually are, which is ridiculous once you hit 18 – 21 at a push – and there’s nothing wrong with being a geek anyway. They don’t say what they are secretly geeky about but I am guessing it is something, like, totally ironic and actually cool anyway, amirite? Maybe cereal, or something. 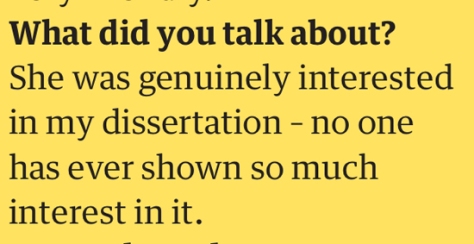 Yes, Aled, she was soooooo interested in it, she didn’t even mention it as one of the conversation topics on your date. Aled, she was pretending. Nobody has ever cared about anybody’s dissertation. Not ever. Nope. I’m serious. No. BTW, mine was about the Labour Party. No, wait, come back. Guys? See? Nobody cares.

Let’s get awkward and hope something interesting happens,

*stares into space* Any minute now, that wisecracking auntie of your youth is going to be along, and you know what she’ll be saying, children.

I wonder how he made her miss her bus? Prattling on about chapter 4 of that dissertation, no doubt.

Table manners! Let’s pray there’s not an “impeccable” in sight, although I wouldn’t put it past them.

Ooh. How long is it since we have had some decent table manners shade? Aaaaages. How do you think he ate the mussels? Slurped them out? Cracked open the shell with his big man hands and threw the pieces up in the air? We’ll never know unless Sarah would care to get in touch.

A true gentleman. Not exactly great #content, though, but never mind.

Oh, congratulations, you’re on a date with Stephen Fry.

Is this a compliment? It reads to me like a spectacular diss of all the women Aled has met before. Maybe it’s because of that bloody dissertation.

As Aled says, usually, nobody is interested. Here, though, Sarah gamely sat through the chat, her eyes perhaps wide and warm. Inside, however, she was composing her shopping list for tomorrow, trying to remember whether she put a wash on before she left the house and wondering if she would have found this any more interesting had Aled unbuttoned his shirt to the waist. 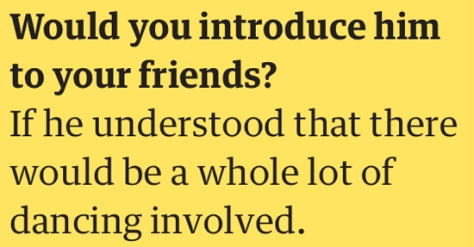 Aled does not look like a dancer to me, but I could be wrong. I imagine he’d love at least to be swinging his T-shirt over his head on a dance floor surrounded by paediatric nurses, though.

Let’s look at the three words.

“Clever.” “Intelligent.” Like two massive school swots trying to prove to each other they’ve read every book in the library.

Obviously, you don’t want people to think you are dumb or boring or witless or drab, but I would not at all be surprised to find that these two had brought their GCSE certificates with them on the date.

Ooh. Sarah was after a snog! She missed that first bus on purpose, didn’t she?

Sarah, we have all done it. “Oh well, he’s kind of dull or whatever, and the dissertation thing is a bit… yeah, anyway, he’s quite fit though so I may as well, y’know.” Totally, Sarah. Totally.

A nice bit of self-awareness from the boy here – I bet Aled is the kind of guy whose girlfriends call him “the boy” in their tweets – and you can almost warm to him. What is this dissertation about, anyway?

All the sevens! Do you think when they tapped out their sevens on the email back to the journalist, they said it in their head like Len Goodman says it on Strictly? Maybe that’s the joke. It is lost on me.

So, with all these super-passionate sevens being bandied about, will they see each other again?

A bit of last-minute shade from Sarah – Aled’s sommelier skills need work, clearly. Though he is only 26. Who cares about wine at 26? But… there seems to be a glimmer of something. Boys, it’s time to dust off your dissertations!

For the second week in a row, the male dater has breezed through the date with supposed charm and confidence, only to bottle it at the eleventh hour and deliver a “thanks, but no thanks”. Face-saving, funnily enough, always seems much more undignified. But if he’s being honest, fair enough.

And you know what that means, ladies. Watch out, there’s a dissertation-wielding Aled coming soon to a dating app near you.

17 Comments
Hello. For the first time in months, Blind Daters can feel the wind in their hair – and hopefully their...