There are lots of misconceptions about gay men out there. That we’re promiscuous, spending alternate weekends at chillouts, spangled out of our nappers on meth. That we all love Kylie. That we’re freakishly tidy.

But the biggest one of all? That we’re all interesting.

Oh how I’ve enjoyed, over decades of existence as one of the most boring people on Earth, watching people’s faces fall after talking to me for longer than five minutes.

Not only do I have nothing to say, I won’t even bother filling the dead air between us with small talk. I’ll just leave you there, dangling, praying for an anvil or a piano to fall from the sky and end this hell for us both.

Gay men, interesting? Throw 100 javelins down Old Compton or Canal Street of a Saturday night and every man you hit will be more boring than David Cameron’s underwear drawer. (Please don’t actually do the javelins thing.)

Anyway, in recognition of this fact, today’s Guardian Blind Date finds us glaring into the cold, dead eyes of two scoops of vanilla on the driest of wafers.

Read what happened on the date between Ricci, 32, a PR manager and 27-year-old Roger, who is a PR executive before I click “Add as contact” on LinkedIn, with tears of blood falling from my eyes.

This is quite an honest, straightforward, acceptable, logical answer to the question, isn’t it? “I was hoping to go on a first date and then go on a second one.” A brilliantly media-trained answer. I can imagine this sentence being tied to the gates of Buckingham Palace, tourists wiping the spittle from the corners of their mouths as they gaze at it in wonder.

A nice surprise. Not a bad surprise, like accidentally going on a date with a rent boy whose meter is ticking, or arriving on a blind date to find your dad sitting there. No. A nice surprise. A double-yolk, perhaps. A Kit-Kat with no wafer within, just more chocolate. Nice.

Spoiler: the “well dressed” will be significant later on. “Chatty” comes up again and again in this column, each time simmering with subtext and intrigue that I can’t even be bothered decoding.

Well, a double-handsome so that’s us off to a good start. As a fellow gay man, I suppose I can break protocol and comment on the subjects’ looks. Yes, they are both handsome.

There is no greater compliment to a gay man than to tell him he’s handsome. And that’s not a misconception – I challenge any gay man, even the horse-frighteners left over at the end of the night, to deny they enjoy being called handsome.

So my theory here is even if they didn’t fancy each other, the “handsome” isn’t so much pre-agreed as understood. It is solidarity. You are handsome. I am handsome. We are handsome.  Seriously, say “hello handsome” to a gay man today. You’ll own that queen for ever.

Do you know what this actually means, viewers? Ricci didn’t listen to – and therefore has zero recollection of, thanks to cocktails – a single word Roger said. Nope. Not a one. Because:

Björk always gets a quick mention when it’s a gay one doesn’t she? I like to think she gets a few royalties chucked her way.

They talked about PR. Two people who work in PR, on a date, talking about PR. My tongue has gone numb.

Only two gay darlings could get embarrassed about bumping into someone while on the date and not about the fact they’re going to be in a magazine read by hundreds of thousands of people – on an orange background, no less. Go figure.

BUT he poured himself some wine before pouring mine. I know things like this are probably very important to, say, Princess Michael of Kent or that great-uncle of yours who “never married” but should a 27-year-old give a toss about this? I don’t know. It’s dog-eat-dog and gay-drink-wine in the dating arena, babycakes – I sense an eternity of disappointment ahead of you unless you chillaxez-vous or whatever. In the meantime:

I think I’d rather take my chances with none, maybe, but OK.

“This isn’t a smile. It’s a lid on a scream.” – Coronation Street’s Bet Lynch.

Handsome makes a surprise return thanks to Ricci. Sadly, we don’t get a quadruple handsome as Roger instead chooses to wheel out some good old end-of-term report, “bored teacher with loads of marking to do and a bottle of vodka in the freezer” standards.

It is quite fitting that Roger’s hair is a bit like Zayn Malik’s because this is where, inexplicably, the date goes in two very different directions. 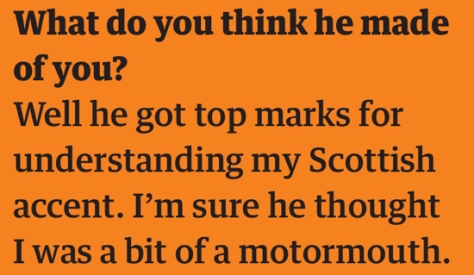 I have a 100% Scotland hit rate when it comes to relationships. Through no fault of my own, both of my serious boyfriends have been Scottish. I like Scottish men. They are funny and self-deprecating and things like “who poured the wine first” don’t matter.

I wouldn’t hand out a gold star just because some dude could understand what I was saying, but that’s Scottish boys for you – generous to a fault.

You know exactly what Ricci thought of you, Roger; that’s why your friend-zoning him to within an inch of his life LIVE in front of our very eyes, on an orange background, in a magazine.

I tell you what, I can’t be bothered checking as I’ve a lot to do but I am willing to bet every last olive or twist of lemon in every martini I am ever likely to drink (quite a few FYI) that one of these boys does the PR for this venue. Only a PR with a vested interest, surely, would throw in such a shameless, specific namecheck. The Vault, in case you’re interested, is in the basement of Milroy’s – they’re actually the same place.

This is like when Cilla unmasked that Cosmo journalist on ITV’s Blind Date, isn’t it? I’ll see you in Milroy’s tonight for that free martini, then, Ricci.

The P in PR truly does stand for pterodactyl sometimes, so let’s see who Roger’s going to plug!

It’s almost like he really wants us to go to this bar, isn’t it? I’m sure he’s just being helpful, right? You have to admire his pluck, really.

Kiss and tell or go to hell.

“A quick goodbye kiss.” Oh, I’ve often been reeled in by the promise/threat of a “quick goodbye kiss” only to be manhandled and pressed against the wall while my date’s tongue goes full “octopus on its first day in a pole-dancing job” around my unsuspecting mouth.

Aw, Ricci. Not that I dislike Roger, but I like Ricci. That’s the thing about being the older person on the date, you are more willing to look on the bright side, really. Usually because the farther you wade into your thirties,  the harder and icier the cold, unforgiving hand of singledom grips your lonely old balls.

Shirts come off, Rog. Even nice, clean white ones like yours get ripped off and crumpled in a heap on the bedroom floor. If you’re lucky. Maybe you’re too lucky at the moment and that’s the problem. We’ve all been there. Some friendly advice from someone who can remember George Clooney with a mullet: Father Time will be along in a moment – sooner than you think – to fuck all that up for you.

That aside, it is poor form to slate another gay man’s dress sense to his face and I would say this column counts as face-to-face.

There is a group of guys I once met who have a system where, if they feel one of their friends has worn something that perhaps doesn’t look very good on them or isn’t particularly ‘suitable’, rather than show them up and make them feel self-conscious while they are out on the town, they will, the next day, send an anonymous postcard to their house. Upon the postcard will be just one word: MUTTON.

Chilling, maybe, but effective, I am assured.

PR people, eh? Can never resist glittering a turd. Each giving an ordinary number a .5. Adding a point-anything to a score is the equivalent of proclaiming a song is a “buzz single” (is flopping) or that a show is on a limited run (isn’t selling).

How interesting that Ricci, who seemed the keener of our two beans, scored Roger lower. A last-minute face-saving exercise? Is he PRing himself?

And on to the “and finally”, where we congratulate ourselves for making it this far and wonder whether it was worthy of our attention.

Note: I have lots of friends who work in PR and this is a gentle ribbing, so don’t panic. All the comments I make are based on the answers the Guardian chooses to publish, which may have been changed by a journalist to make for better copy. The participants in the date are aware this may happen, I assume, and know these answers will appear in the public arena. I am sure, in real life, they are cool people. I am critiquing the answers, not the people themselves. If you are the couple in this date and want to give your side of the story, get in touch and I will happily publish any rebuttal.

19 Comments
Hello. For the first time in months, Blind Daters can feel the wind in their hair – and hopefully their...