Another Saturday, another couple willingly, inexplicably, subjecting themselves to the glare of the nation.

My relationship with this column is a confusing one as, while enjoy it, I do not understand why anyone would want to be in it. No more than I ever understood any of the men who would email me asking me – begging, sometimes – to take them on a date so I could write about them. I think even Narcissus might look up from the lake in horror at that idea.

They don’t give their ages this week, which is unsettling as Rena and Chris look like the kind of people who could either be 19 or 37. Chris has a beard; Rena has an undercut. Let’s pretend they are both 28 – I liked being 28. 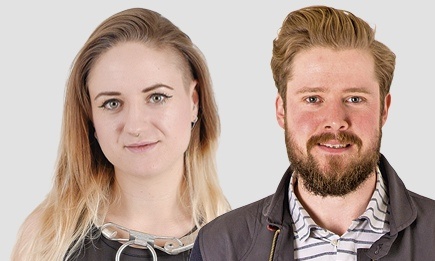 No occupations given online either, so I assume whoever was whacking today’s edition on the CMS in the early hours of this morning had a cab and a bottle of Pinot Grigio waiting. Anyway, read it and see what you think before I wade in. Warning: there are distressing scenes of a table manners nature.

Rena kicks us off:

These conversation topics are like a time capsule – things you could *only* talk about if it were late 2014 and you only looked at Twitter twice a week. Nobody has been talking about the cereal cafe for *months*. It is the conversational equivalent of Adrian Mole turning up to the youth club in flares in 1983.

” Yes, I have a kind of bushy beard and could’ve been born any time between 1973 and 1992.” I’d have found him straightaway, wouldn’t you, viewers?

It’s table manners next. Hold on to your hats. Spoiler: I’m wearing black and am adjusting my mantilla.

Rena. RENA. If, by some remote chance, you’re a regular reader, I’ll let you off. If not, how could you? If Chris says it as well, there will be blood. Actual blood.

Crisis averted. I can call off the nuclear weapons. Although, what does this even mean? Who really goes on a date to a Fitzrovia restaurant (I looked it up) and displays table manners anything other than exemplary? Would you even notice table manners unless the other person ate with their hands and/or had sex with a waiter on the table while you ate pudding? No, of course not. Also, the restaurant they chose has a very ugly, annoying  website – even worse than Sketch’s – so I wouldn’t eat there.

You may think we have peaked there with that “Impeccable”, readers, but guess what? Rena is the gift that keeps on giving – get a load of this:

Oh, that loud whirring sound? It’s just me turbo-rolling my eyes. Giving stuff up for Lent isn’t “a thing”. We have Dry January now, if you really want to be worthy and have everyone congratulate you for not lifting a glass of wine  to your lips, that most arduous of toils. Come on.

Seriously, You’re on a date. It’s all free. Fuck Lent. Pour me a gin and tonic. Double. No, no lemon or lime – there’s no room in the glass.

It may seem like I’m shortchanging Chris here, but when you have an all-gold, A1 Blind Dater like Rena – an “Impeccable”, no less – you don’t waste any time. Anyway, here’s Chris again:

Chris, who cares what she thinks of you? She gives stuff up for Lent and says your table manners are impeccable; you will always come out the winner here. Or possibly not. Rena’s back:

Rena scores Chris a half-enthusiastic 8, while Chris gives her a non-committal 7, which is very ungentlemanly and proves you really need to pre-agree scores for this thing.

And then we get to the final line, which has me kind of feeling like an overprotective mother at the school gate, because I have inexplicably warmed to Rena, my cross-shaped child I have to bear: 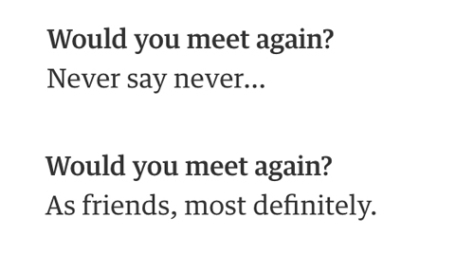 Rena’s “never say never…” is polite, dignified, but Chris had to make it clear that beard and undercut do not a couple make with his “as friends”.

What put you off, Chris?  The gin and tonic avoidance? The cereal cafe chat? That in-depth and totally original bantz about the BuzzFeedification of journalism and thus modern life itself?

You messed up Chris. Anyone willing to say your table manners are “impeccable”, which is simply impossible to say of anyone with a beard in my view, is a keeper. Big mistake. Huge.

3 Comments
Assuming our blundering PM's 'roadmap' doesn't in fact lead us all into the sea, we should be back doing socially...

10 Comments
Week 7,004 of the dystopian present lurches to an end, with another two days of pretending brisk walks round the...

18 Comments
I think we can all agree that Zoom, generally, isn't working for anything other than awkward business calls and parish...

15 Comments
Happy New Year. I don’t know if you know any lesbians, or bi women, or women who date/sleep with other...