Writing this on a Sunday feels like wearing a Team GB T-shirt a year after the Olympics or a Santa hat in February, but it’s Sunday and here we are.

Today (or yesterday), we have Owen, a 27-year-old research student, and Marina, 25, an assistant music agent. Both occupations/statuses that, if I were to hear of them at a party during some introductions, I’d cock my head to one side, maybe purse my lips a little and squeak: “Ooh, sounds interesting. What does that entail, then?” But then I wouldn’t listen to a word because I’d be too busy giving fuck-me eyes to the nearest gin and tonic.

Anyway, read what happened on the date and I’ll be over here smoothing down my pinafore and getting ready to let them have it.

Owen kicks us off.

Years ago, I had to break it to a guy I’d been seeing that I didn’t see a romantic future for us, but I’d love to remain friends. His response was impressive. I’ll never forget it. “Friends? Great. I don’t know about you, but I joined a dating site to fall in love, not to make friends. I don’t want to be your friend. Fuck being friends.”

He had a point. Romantic potential is the whole reason we’re here; it’s not a bonus. Finding a Kit-Kat with no wafer in the middle and only chocolate is a bonus, and I see no surprise chocolate here.

Spoiler: Marina’s answers all have the air of someone who was caught straightening their hair while the phone rang. She’s polite, but she really must be getting along before her ‘bangs’ frizz up.

From religion to Armando Iannucci – that’s not a conversation I’d want to be stuck behind on a long bus journey .

If your mum is available to dispense advice, you should always take it. Button up those coats (and take them off indoors to feel the benefit when you go out later), eat your greens, don’t talk to strangers and, of course, never talk about yourself too much. How did he do, Marina?

In the online version of the date, Marina goes on to say: “I was less impressed when he asked me for the third time where I live”.

Poor Owen, he seems to have spent the entire date with his fingers in his ears, facing the wrong way. Maybe he just really liked the way she said “Clapham” (or wherever) so got her to repeat it, like a guy I used to know who’d make me say “cellar door” over and over again while he… oh, actually, never mind – it wouldn’t feel right telling you on a Sunday. 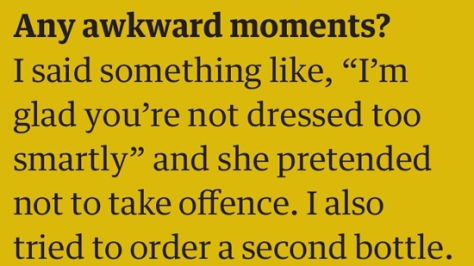 Owen is that man on the Titanic who just missed the last lifeboat so decided he might as well order a mojito and drown happy.

Marina – treating her appearance in this column like someone knocking at the door trying to sell you tea towels.

Table manners next – let’s hope Marina can look up from her Take A Break long enough to give us some juice. Owen first though:

Owen is so apologetic, so keen, so eager to please. And destined to be foiled. Owen is Penfold. He is Smithers.

I can’t think of anything to say about this; I am only typing here so the GIF above moves farther up the screen, because it’s making me feel sick.

If I were a basic bitch I’d say something here about herpes being contagious too but I’ve got more class than that so let’s just say Marina here seems like she really wanted to answer, “Owen’s cackle sounded like a fire in a pet shop”.

OWEN. Don’t say things like this. Either you’re being really overly self-deprecating – which is a guaranteed boner-killer – or you have totally garbage friends.

If your friends would really prefer Marina to you – and Marina is giving off some serious ‘bored behind the counter at River Island’ vibes – then perhaps you need to get some new ones. Maybe go on more dates! That’s a good way to make friends, right?!

Ooh, look, the traditional “chatty” jibe has got its hair did, put an extra chicken fillet in its bra and is showing off some new confident vibes. Talkative, it’s never a compliment, is it? Unless you’re trying to sell someone a budgie.

of course you’re a bloody cheapskate.

Owen would make a fabulous sassy gay best friend in a Radio 4 drama, wouldn’t he? Agents: get calling.

Marina’s eye-rolling can be seen from space.

If the racists really are right and there is no room for refugees, why don’t we swap out every person physically unable to answer this question with yes or no for someone who needs asylum or safe passage or whatever – that should clear out a few towns.

I am willing to bet this originally said “FUCK no” and had to be edited.

Marina ran off, didn’t she? In fact, she probably miraculously produced some rollerblades or one of those weird scooter things out of her handbag and zoomed off into the sunset, eager to get anywhere Owen wasn’t.

For some reason, Marina’s answer reminded me of the little bit of trivia that Charlotte Church’s favourite way of relaxing used to be spending all night hogging the karaoke in her mum’s pub.

Some vastly differing scores, here. It’s like the date happened over email, or videoconferencing. Marina’s 6 screams out into the abyss – she really wanted to be somewhere else.

Note: All the comments I make are based on the answers the Guardian chooses to publish, which may have been changed by a journalist to make for better copy. The participants in the date are aware this may happen, I assume, and know these answers will appear in the public arena. I am sure, in real life, they are cool people. I am critiquing the answers, not the people themselves. If you are the couple in this date and want to give your side of the story, get in touch and I will happily publish any rebuttal.

11 Comments
As Steps once wisely trilled: 'Summer is over and all we are is apart', except, luckily, we don't have to...

9 Comments
August! The cigarette-end of summer! Last chance to find a regular ride before magazines start banging on about cuffing season...

9 Comments
Remember when Katy Perry sang, in her million-selling hit Firework, 'Do you ever feel like a plastic bag?' At the...