Some are scared to be by themselves, while others revel in solitude. And most of us nestle somewhere in between. Give us a roomful of people and we’ll crave a padded cell, yet watch us walk into an empty room and cry for company like a puppy spending its first night away from its mother.

I am moving in with my boyfriend next month. It will be the first time in five years I have had to live with anybody. I knew this time would come eventually – that day of reckoning when my arrivals back at home, pissed, clutching a McDonald’s and staggering into the furniture would have to end. Or at least happen only when he’s away.

When I first started to live on my own, I was in a state of shock, I think. On the first night, a friend who’d helped me move stayed with me, but as I closed the door on her the next day, I sat on the sofa for a while, listening to the wailing sirens and unfamiliar voices from the streets below – streets I didn’t know at all – and wondered what I would do with all this space. All this freedom. All that time. I had never felt so free. I had never felt so sad.

I was coming out an eight-year relationship when I moved house and my fragile state shows in unpacked boxes I have had to look in for the first time in five years. Books I must have known I would never read, old notepads filled with “just popped out” or “I love you” messages between me and my ex and, amid the valentines, birthday cards from dead relatives and pictures my little sister used to send me, an old Greggs bag. 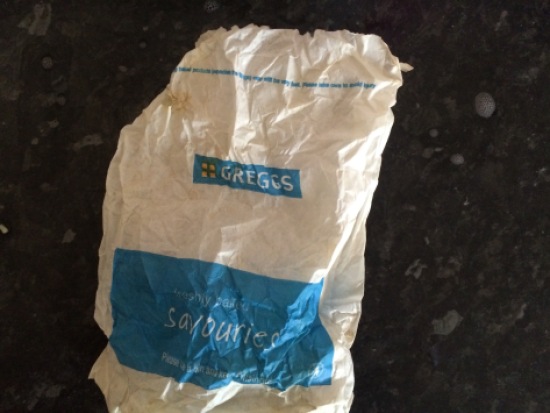 I wondered what had been in it to warrant its preservation. And then I remembered, it was the first thing I ate after the last box had moved in. My first pasty as a single man, a bachelor. Alone. Not realising its significance years later, I must have shoved the wrapper atop the nearest box and thought nothing more of it.

Imagine a greasy old paper bag stirring up so many feels. It’s the main reason I can’t bear to look at old photos too often – I’m a sentimental, emotional wreck. The more of the past I have behind me, the more it absolutely devastates me. All my mistakes, stacked to the ceiling in row upon row – behind me but forever around me.

But now I won’t be on my own any more. This is exhilarating and terrifying. There have been some amazing things about living alone, and some terrible things.

Things I did when I lived alone

1. Ate ham sandwiches for lunch ten days in a row.

2. Revelled in the pathetic hedonism of standing in my underwear, eating an Easter egg straight out of the fridge.

3. Explained “it’s my cleaner’s year off” when a one-night-stand sees my kitchen in daylight for the first time.

4. Made friends with a whistling kettle as it’s the only “voice” I’d hear all day.

6. Realised that absolutely every food available in a supermarket is geared toward two portions or more.

7. Treated my freezer like a cupboard marked “things I will never want to eat”.

8. Frantically tidied up before that bloke from Grindr came round.

9. Had a bath with that guy from Grindr.

10. Stretched out like a starfish in my kingsize bed on the first night – only to return to my normal “side” for every night thereafter.

11. Went out on dates with just about anybody with a pulse to avoid sitting in and staring at the walls.

12. Not got dressed until 5pm because nobody could see.

13. Experienced next-level hangovers. For some reason hangovers always 20 times worse when you’re alone, but at least nobody is there to nag you.

14. Always knew where absolutely everything I owned was, because there was nobody else there to move it. Except my keys – I can never find those.

There are lots of things I will miss about living on my own, but I won’t miss them half as much as I would miss seeing his face every morning.

More like this:
17 things single people do that make couples want to kill them
Falling leaves, romantic walks and endless parties – autumn’s no season to be single
The post-breakup bachelor pad survival kit
Why everybody needs a broken heart

How to be single in autumn

no comment
I love autumn. It may be a cliché to harp on about its colours and the smell of bonfires and...

no comment
I've never believed in "lucky" pants or socks. Underwear is underwear and I have almost never had someone peel off my...