Gay men today! This could be just what we need. Here are José a 36-year-old project manager and Tom, 31, a restaurant manager. Click on the pic to read what happened on the date before we join them for a fight in the lily pond (’80s reference – avail yourself of Google). 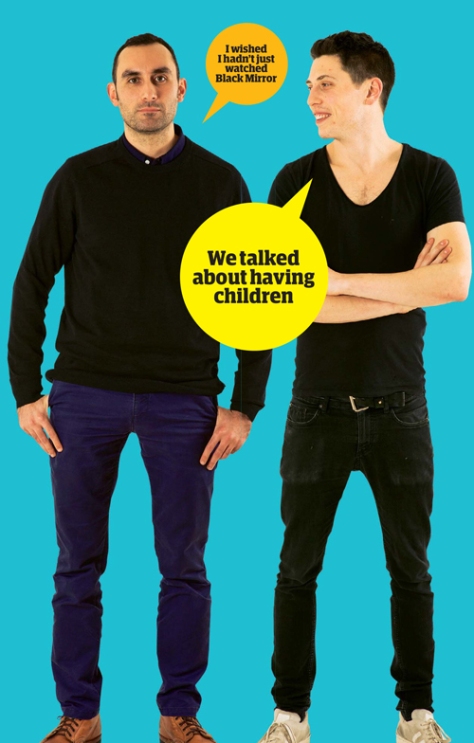 Is it? It is if you go to the same three bars and always hang with the same people and never sleep with anybody you haven’t spent at least a year WhatsApping, I guess.

Here you go, Tom. Quite shocked you don’t have this already, tbh.

I quite like Tom’s cheeky allusion to the fact he’ll definitely F on the first date because, look, we’re gay men and we’re a long time dead so, come on. I’m not sure I would ever accept breakfast from a one-night stand, though. The trouble is, you know exactly where their hands have been.

A bona fide first impression. Although it does sound like a description of a dalmatian.

Not strictly the kind of first impression we’re going for. You would think that the question comes so EARLY in the set would be a clue to them, but… oh I’ve had enough. I shan’t feature this question again unless the answer is interesting.

We only have one restaurant manager among us and that is not José, so I think our man is trying to tell us Tom wanged on a little too much about his job. You’ll notice “managing projects” is not among the conversation topics here. I don’t know what you’d say about being a project manager anyway. “Yes, I walk into rooms and let everyone else do the talking until, by my silence, I’ve convinced them all it’s their fault we’re behind schedule, then I sit staring into Excel spreadsheets and project timeline software for a couple of hours, send emails to ‘stakeholders’ at annoying times, implying that anything less than a speedy reply would hold up the entire project, then, after warming my scarf and gloves on the top of my MacBook, I go home at 4:30 pm, and invoice them for £450. Per day.”

I refuse to believe live music during dinner was anything but a pain in the arse, but I’ll have to give José the benefit of the doubt because he was there and I, sadly, was not.

As “regular readers” may know, my bêtes noires when it comes to dating conversation are, after exes and politics, “London life” and “dating”. I’d love to know what hitherto uncovered mysteries about London these two managed to air. London is one of the most fantastic cities in the world but I like to think living here is like a magical spell, and if you start overthinking it and talking or analysing about it too much you will break this enchantment and realise– with a lurch of the stomach – that it’s just a big Southampton, with nicer buildings, better places to get coffee, more than one decent H&M and loads of people who hate you.

Ditto dating. Nobody wants to hear your horror stories or “a funny thing happened once” monologues. Get a blog so we can ignore it in peace. Worked for me.

Yeah. They kind of have to do that to take your order. You know, as much as they’d love to spend all night watching you forensically debate the pros and cons of getting the Central line instead of the Overground – which I am willing to bet you call the “Ginge” – to east London, they have orders to take, bills to prepare, restaurants to clean, and homes to go to. A waiter’s nightmare is two daters engrossed in smalltalk who keep saying “We haven’t even looked!” when they come over to try to get you to order a starter, 35 minutes after you sat down.

When a waiter says to you, “Are you ready or would you like another couple of minutes to decide?” they actually mean “Bitch I am here now and the food all tastes the sodding same. You’re not defusing a bomb or picking a new sofa, just get on with it. And when I say a couple of minutes, I mean I will be back in exactly 45 seconds and you two better be ready. You better. Don’t make me mad. I’m crazy”.

But of course Tom should know this. He’s a restaurant manager. Unless he’s one of those people who takes the opportunity of a day off to behave like the worst customer. Oh, you know, like people who work in a shop and then go to a different shop and DEMAND the very best service because they “know how this works” and “have high standards”.

I don’t think I’ve seen such a weak attempt at building and maintaining suspense since Downton Abbey was last on.

Does this happen to you a lot, José? At client lunches, perhaps, when they see your daily rate on the invoice?

This is fine. A decent answer. No praise for being able to sit up at a table and not get carbonara down himself, just a statement of fact: he wasn’t offensive.

“He talked too much.”

“He barely said a sodding word.”

“No. But I can say yes because it is never going to happen as, inexplicably, despite working as a project manager in London, I have no friends here. They are in Portugal. Yep. Otherwise, I’d love to introduce him to them, I really would.

“No. But I would show them his dick pic if he sent one.”

Can I just take a break here to do this:

CHATTY like he talked too much, hang on have I already said that, I guess I have but I need to say it again. He talked too much.
POSITIVE like a pregnancy test a soap character always finds in the bin when they are searching through it for some nonsense reason.
FRIENDLY like a cat that thinks you know where the tuna is.

GENUINE like around 75% of gay men on Grindr claim to be.
CULTURED because he’s from Portugal and ordered something that didn’t look or taste that nice.
EASY-GOING like an uncle who has concerning views on immigration but “really loves curry”.

None? Really? You can, I guess, walk away from a date – say, an excruciating two hours of turbo-silences, staring out of windows and wringing the end of your shirt in your hands – and not have any particular clue what someone thought about you. But to end an evening with a stranger – a GAY stranger – eat in the Oxo Tower, and then (spoiler) go on for more drinks after, and come away with absolutely zero impression of what they thought about you? NOTHING? Like, no analysis of the situation whatsoever? No scenario-building? Nope?

Or, more likely, you have a pretty good idea what he thought of you, but you’d rather not say. This question is actually a very big trap. Assume the other person liked you and you risk looking like a bighead and/or an idiot when they absolutely drag you in their sketch of the evening. Say they didn’t like you and you could be cockblocking yourself

Spark. The get-out. The silent killer. It has extracted me from many tricky situations. “No spark” covers all bases. It is the kindness, the trip to Dignitas, the polite decline for the boring, the stupid, the joyless, the bigoted, the pathetic, the bitchy, the braindead, the hairy-backed, the selfish in bed, the balding, the unwashed, the obsessive, the coldhearted, the shameless, the shameful, the C*NTS – all the things you cannot say are conveyed with “no spark”. It means no thank you, not now, not ever. Not you.

All that chat about “London life”, like they had two rolled-up Time Outs and were bopping each other over the head,  and they still ended up in one of the top 5 worst bars in the capital.

Dates used to ask to meet there sometimes, in that sodding bar. “The nice one,” they would say, “the one at the back.” Compared to the one at the front, which is like sitting in among a pack of chihuahuas while an airhorn blasts continually, I guess it is “the nice one”, but I should’ve known better and not bothered turning up. That bar somehow drains the sex potential from you. It’s so charmless, and stressful, and free of atmosphere – you can’t even see anything from it, just loads of concrete giving you the side-eye and someone having a substandard dinner in the even worse restaurant adjacent to it. Seriously, just stay home, sit on an uncomfortable beanbag, crack open a bottle of unchilled wine you paid too much for, half-tune for radio into TalkSport and have a wank –you’re already having a better time than anyone in that bar.

“Look, I’m a professional and I wouldn’t stand for this in my establishment.” Way to get a waiter SACKED in a magazine column, by the way.

Don’t ever let anyone tell you gays are mean. We’re just as shy, sweet, dull and desperate as everyone else. For example, these two sevens are ones if ever I saw them and yet, despite the date sounding as interesting as sanding a floor or counting the sequins on a drag queen’s frock, they managed to keep things polite and award each other a 7.

Disclaimer: The comments I make are meant to be playful and humorous and are based on the answers the Guardian chooses to publish, which may have been changed by a journalist to make for better copy – you know how it is. Anyone participating in the date would usually be made aware of this editing process before taking part. If you are the couple in this date, please don’t take this personally. It’s about what you say, not who you are, and most of the time I’m just reaching and making something out of nothing – a lot of nothing. If you want to give your side of the story,  or send in your original answers, just get in touch and I will happily publish any rebuttal or comments you might have.

18 Comments
Hello. For the first time in months, Blind Daters can feel the wind in their hair – and hopefully their...