December. A month of too-soon nostalgia, everybody winding down, sore throats, and retail panic only made more bearable because there are pretty lights everywhere and there’s at least one roast dinner guaranteed near the end of it if we’re lucky.

The trouble with being surrounded by year-end reviews and people staring misty-eyed into Christmas trees while they sip thoughtfully on eggnog is you start to look back upon your own year and what you’ve done, especially if you’re single. That guy I kissed and then walked away from in July, hoping he’d follow – did I try too hard to be mysterious? The woman who texted me keenly three times during the Olympics but I was too busy to reply – was she the one? December brings it all: gold, frankincense, myrrh, and regret. Don’t be fooled by memories and should’ve-beens scented with cinnamon and pine needles, however – you were probably right first time.

Nervously looking at each other over a polystyrene cup of mulled cider in a woeful popup in Southwark this week are 26-year-old lawyer Jen and Jeremy, 29, a chartered surveyor. Well.

Jeremy does not appear to be looking into the lens of the camera which I always take to be a very bad omen, but perhaps he muddles through. Read the date and find out, before I lean in to inspect a bauble and somehow “accidentally” bring the whole tree crashing down.

I was talking about this the other day, how important it is to be with someone who make you laugh. I totally agree, but it depends how they’re doing it. If they’re the kind of person who can’t take anything seriously, ever, then no thank you – it would be like dating Mr Blobby. Similarly, if all their laughs come from waspish humour and pithy putdowns, this can get old very quickly – just ask my boyfriend. No, if you’re going to hang on to someone, your comedy routine has to be varied, the perfect mix of highs and lows, pathos and bathos, sleaze and wit, gallows and end-of-the-pier ready. No pressure.

Outgoing. You don’t hear this much anymore, do you? I suppose it can be interpreted as a bit of a diss these days – nobody likes a show-off. Well, not the old-fashioned kind of show-off anyway. It’s perfectly OK to photograph yourself on an hourly basis (clothing optional) and document every single moment of your life on social media, but be a bit outré in polite company for more than five minutes and your companions will be drawing their fingers across their throats and dragging you on WhatsApp the next morning.

So I’m pleased to see “outgoing” make a comeback, right at the fag-end of 2016. Let’s be a bit more of that for the rest of the year, in whichever way you like; we’ve earned it.

“His course on how to cook Christmas dinner on a barbecue” – can anyone else smell that? No, it’s not the faint aroma of burning turkey or the distinct whiff of pigs in blankets rolling off a fatty grill into powdery ash, never to be seen again. It’s… well, let’s look at the evidence. A Christmas dinner on a “BBQ” – where would you do such a thing? Yes, that slightly malodorous pong assaulting your nostrils is the hot air of someone chatting about their gap year Down Under, isn’t it? Just hold your nose until it passes.

“My friends are running out of interest.”

They were never, ever interested. Unless we have some kind of blood or emotional connection to the infant, or are longing for a child ourselves, or are casting an am-dram production of Bugsy Malone, you may as well show us pictures of teapots, or drawer knobs, or dead senators. We don’t care.

New on BuzzFeed: Five Conversation Topics You Didn’t Know Were the Perfect Catalyst For Finally Getting Round to Doing Yourself In. 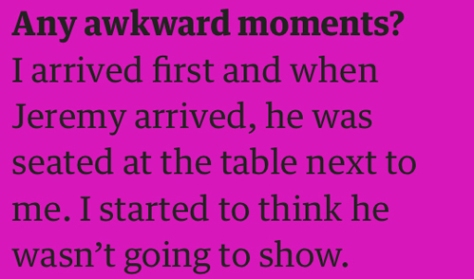 Cecelia Ahern couldn’t have written it any better.

But, seriously, how does this happen? Table booked under a certain name, you arrive at restaurant, give name, are seated at table by waiter who takes an instant dislike to you for no reason, you wait, other person turns up and gives the name and is seated opposite by said same miserable waiter. How hard can it be?

“I arrived first” is hanging in the air like a champagne glass about to shatter, isn’t it? Jen is not happy about arriving first.

The best thing. Did you ever imagine a world where a pair humans  could say the best thing about each other was “New Zealand”? Nothing else, no other flutter of the heart, except the palpitations brought on by the mere mention of New Zealand?

This, of course, is an answer given when there is nothing else to say, or don’t want to give anything away. If there is nothing to say about someone, and you don’t want to throw your head back in fury and start typing about the stupefying conversations, the basic anecdotes and dreary attempts at quirkiness, then FINE. Whatever. But if you’re playing your cards close to your chest, you’re in the wrong place. The chaste PG double-feature is in the auditorium next door – we’re here for the blood and gore, and my popcorn is getting cold.

Being from or living in New Zealand the best thing about someone?  The very best? The zenith? The summit of excellence? Don’t be ridiculous. You’ll be telling me you connected with your soulmate over a shared interest in the big Nando’s in Centenary Square, Bradford, next. Get out.

I think I could be in a room with Jeremy where the temperature was 55°C and I still wouldn’t undo the top button of my blouse.

You can’t go through your life shrugging your way into social situations, Jeremy – it’s bad for your posture.

Kind, like a relative who brings grapes to your hospital bedside and doesn’t spit the stalks back into the bag.
Funny, like that smell.
Enthusiastic, like the person who finished last in a sack race but is still wildly excited to be offered a funsize Mars bar as consolation.

Smart, like a lovely two-piece (mauve) in the window at C&A in Leicester in 1983. (If there was no C&A in Leicester in 1983, please do not write in; I don’t give a fuck. But I think that’s where Adrian Mole got his school trousers so there very probably was, thank you.)
Funny, again. I don’t have another simile for this one, sorry.
Attractive, like oh so you’re not actually dead in the crotch area, Jeremy – I was beginning to wonder.

Confident, great, yes I imagine you could say Jeremy’s “smart” alluded to confidence, but here we are again with the “scatty”. I don’t have a photographic recall of all the Blind Dates but I am almost positive that the guy on the date NEVER says he thought the woman was scatty, or a chatterbox, or a bit mad. And yet here it is, week after week.

Men never have to check their behaviour. I mean, see Jeremy’s answer below. “Who knows?” He doesn’t give a fuck. And why should he? He’s never been taught that he must. Women, however, there isn’t one thing they do that isn’t scrutinised and pulled apart and fretted over by everyone male and female – whether it’s how they behave in public, what they wear, who they have sex with and how often, their cooking skills, their fertility, their marital status, their hair, everything. Everything.

And this is why, almost every single week, when the woman on the date is asked to stop reviewing the other person and consider instead how she came across, she instantly looks for the negative. Even if it is nonsense, she will hunt it out. There is absolutely nothing about Jen’s answers that could be considered remotely scatty; she is from New Zealand FFS, and most of those women do not take ANY shit.

The worst thing about this use of “scatty” is that it immediately follows a “confident”, something women hardly EVER say in this column, and you’re like YAY and unfurling the ticker tape – before you see the door isn’t actually closed and there’s someone else coming in. Oh, look, it’s good old “scatty”.

Anyway, we need to stop making women think that they’re in some way awful or annoying, or have to invent ridiculous characteristics for themselves just so men won’t think they’re too big for their boots. It is bullshit. It hurts us all.

See? Maybe he doesn’t even want to guess. Why would he?

Imagine being in your 20s and even having any concept of “late”. You have plenty of time to be in bed by midnight when you have no other option. Stay out, have another drink, sweep your fringe out of your eyes, flirt with a barman. (Full disclosure: I left a Christmas party at 6:30 pm the other day.)

Why? It sounds like the most exhilarating thing to have happened to you all evening.

Regular readers will know I am not fond of using food as deflection. At least Jen was honest; the chat about cows made her want to dress in a turkey costume and go dancing at Bernard Matthews’ largest abattoir. If the evening was a fucking dud, then say so. Don’t blame your bad menu choices.

Fackin’ ‘ell. Six point five. There’s brusque Kiwi, and there’s Kiwi who won’t just be not taking your calls, she’ll be setting fire to her mobile phone to make sure she doesn’t answer by mistake.

Will you meet again? God, I couldn’t care less but we’re here now. I’m guessing Jen is already in witness protection and Jeremy’s going to let us know his true feelings in a couple of hundred years, just as soon as he’s cleared his threat and found the camera lens.

Note 1: All the comments I make are based on the answers the Guardian chooses to publish, which may have been changed by a journalist to make for better copy. The participants in the date are aware editing of answers may happen, I assume, and know these answers will appear in the public arena.  This isn’t about me thinking these two people are bad people – I don’t know them. I am sure, in real life, they’re great. I’m critiquing the answers, not the people themselves. If you are the couple in this date, please do not take this personally; I don’t see the date in advance so my reactions are my first ones. I do this live on a Saturday morning. My dad went to New Zealand and said it was marvellous. If you want to give your side of the story,  get in touch and I will happily publish any rebuttal or comments you might have.

Note 2: The Impeccable blog is now taking a break.

16 Comments
And, lo, it came to pass that as we entered the 700th week of lockdown or whatever we're calling this,...

18 Comments
I'm sure we can all agree it's been quite a week. I think even without everything that's been going on...