It’s occurred to me more than once that I’ll never have those proud moments as a parent. I won’t get to wipe away a tear as I watch my progeny take its first step, totter off into school for the first time, toot the horn on its first driving lesson, or graduate. Thanks to social media, life does seem to be a great big competition to have as many big emotional moments as possible crammed into your day, and save for watching Madonna do Vogue at the MTV Awards in 1990 for the umpteenth time, my days are remarkably light on those.

One good thing about not being a parent, however, is that I won’t have to pretend. Being a parent looks like a lot of pretending. Pretending their first portrait of you is a masterpiece and not a rather frightening rendition of what you would look like if a bomb went off in your mouth. Pretending their singing or acting in the school play was anything other than the standard of the first three weeks of Eldorado. Sitting tight-lipped when they bring home yet another wastrel and profess their undying love. Not saying I told you so when it all goes horribly wrong. Ignoring all the signs the process is about to begin again.

As a parent you have to ignore the horror and glide through life like everything is fine, hiding your dread when they do something disastrous. And this morning, I felt that parental pang when I saw today’s Guardian Blind Date duo because, reader, I ‘know’ one of them. He follows me on Twitter, and I him. I didn’t know he was going to be in the column this week, or indeed ever, so when I spied him on the page this morning as I forced my eyelids open, I had to make a call.

Do I sit this one out, and wait for next week? Keep a respectful, parental silence? Or do I do what no parent should ever do – as soon as the curtain comes down on their school play, walk calmly over to them and hand over my critique of their performance, in the reddest of pens and the thickest of nibs? What would you do?

Well, to be honest, it doesn’t really matter what you’d do, because I am sitting here and you are not. I’m going in.

Read what happened on the date between 28-year-old publicist David and Kevin, 25, a political campaigner before daddy gets to work.

David (left) is in green and starts us off. Kevin (on the right, obviously) is in yellow.

I suppose this would be a reasonable expectation if you were going to a burlesque club or maybe a cosy pub, sitting in the snug with the hustle and bustle of the boozer just enough out of earshot to hear each other talk. A Vietnamese restaurant in the ‘wilds’ of Islington, however, which is where these two have ended up, isn’t exactly making me bite my lip in anticipation.

Kevin has literally never seen this column before in his life.

I like it when ‘sweet’ comes up. Not just because it’s as twee and sexless a compliment as you can give anybody, but because it is actually a huge signal, a spoiler if you will, about how the date’s going to go.

And kind? Ouch. I haven’t seen a friendzoning this fast since Taylor Swift coughed awkwardly when Ed Sheeran asked her out to dinner.

Clothing and friendliness, very good, yes yes, but what’s the low-key about here, hmmmm? Was he hiding under the table? Dressed in camouflage? Communicating only by blinking?

I know this is Kevin’s job, so I get why this has come up, but I am allergic to talking about politics on a date. I can’t. Every time politics have come up, it’s gone badly. On pretty much each occasion, the other guy has been doing perfectly well and then out comes the politics and a garbage opinion.

When I’ve mentioned this before, I’ve been told this is a good thing and I should enjoy the debate and try to put my point across, and while I do enjoy feedback from boresplainers, I’m afraid I cannot agree. The thing about politics is you will almost never be able to change the other person’s mind, even though you will both aggressively, thickheadedly try.

It is good, I guess, to weed things out early on – like, nobody wants to fall in love with a mad racist – but beyond that, arguing about Brexit or the coalition or foreign aid or, as always comes up and would always send me flying into a rage, people on benefits and single mothers. People who think those on benefits are cheating the system, for example, will never change and your date is only going to go off a cliff if you carry on arguing the toss with them.

If you are both really into politics and this is a turn-on, then great, but I guess I had a nasty habit of picking men who voted for the ‘wrong’ side.

Anyway, I digress. I once went on a date with a political candidate. I have some interesting sex stories should he ever become prime minister, but his chat wasn’t up to much. We got on quite well but I can only assume he eventually Googled me because a few days later the dirty texts stopped and  I got the most hilarious missive explaining he wanted to concentrate on his career. Every so often he pops up in the paper, grinning amid his constituents, and I do find it vaguely amusing what else I’ve seen that earnest face do.

Idly wondering whether Australia being in Eurovision got a mention. 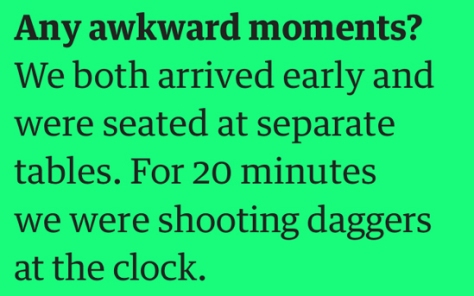 Very often on dates the best part of the entire evening is before you arrive. The anticipation, the butterflies, the last frantic chomps on chewing gum before you walk in; the smiling, nervous glance around the room to see if they’re there. Heaven. Like a drug. I’d cherish those moments.

But of course with every high there is a comedown, and then your date arrives and his photos are obviously 10 years old, he’s not 6’1″ and he’s come straight from after-work drinks and the first thing he talks about is UKIP.

This may seem classy to David, but it’s a no from me. At restaurants like this, the system is your food comes when it’s ready. It can be a bit of a pain if one of you has ordered something more complex, of course, but that’s the system. Rules are rules.

When you’ve known someone a while, you can conspiratorially agree to dick about with the waiting staff’s day and pretend you ONLY want to order starters so they don’t bring everything all at once. You then wait until the plates are being cleared away and go “A-ha! Actually we do want a main course too!” Waiters can see right through this, of course, and will go back to the kitchen and roll their eyes while you congratulate yourself on ‘sticking it to the man’. Your medal is in the post.

Insisting your food comes in the time and way you choose is, well, it’s a bit like when aged celebrities who are trying to keep it real go to posh restaurants and insist on egg and chips being specially prepared for them. Maybe it seems charming, but, when in Rome, y’know. This is the kind of thing your granddad would do to assert his authority. It would flag up to me that this guy was a little on the controlling side. Not a good look.

And *that* is how you psychoanalyse someone to within an inch of their life, based on the most casual of remarks.

I let others order first. I’m very polite. But if they take too long, I steam on in because I hate to see a waiter dither. So now you know.

Imagine someone saying the best thing about you was actually something you were not.

Pity us poor bitchy gays, forever left on the shelf because a few special snowflakes can’t take some REAL TALK. How ever will we survive?

“A lot to say for himself.” Yes I’d be thrilled if someone said this about me. Truly. 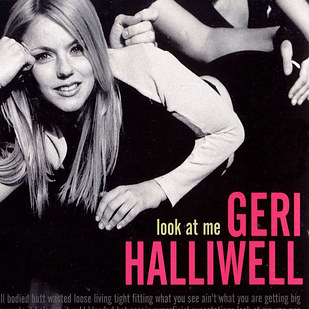 We’ve all been there.

I went to see The Bodyguard, but Alexandra Burke was in it. I did go to see a musical Beverley was starring in, but when I got there discovered it was her night off, FFS. Amazing fact: I bought Beverley Knight’s first-ever single, Flavour of the Old School, on cassette. They’re my Beverley Knight anecdotes. Not as good as the one above, but they are at least TRUE.

I’m pleased these boys are getting on in a “thanks but no thanks” kind of way, but I’m also thinking of sticking my finger in the plug socket just for something to do, tbh.

He doesn’t mention that you were funny at all, Kevin. I’ve checked. He says you were sweet, twice, decent and personable, which is how police would describe a man who knocks on old people’s doors and cons them into having their gardens paved over or empties their savings tins from under the bed.

“He was so personable” is possibly the least sexy thing you can say about someone without describing them as a microwave oven.

Gay men now officially as sexually liberated as a straight couple doing the Atkins, with early starts in the morning and bemoaning a lack of ‘spark’. Truly the equality we have all been fighting for all these years.

Why stop at two, David? What this date desperately needed was a bucket of wine each and SHOTS.

Sevens. Barely worth persevering to the main course, tbh.

So we’ve made it to the end, and have witnessed two very nice young men sit at the same table and continue to exist, if nothing else. But does their destiny lie together – and if it does, will they ever be able to get over the fact I’ve seen second cousins with more sexual chemistry – or will they merely take their polite and personable selves in separate directions? It’s the ‘meet again’ clincher:

Note: All the comments I make are based on the answers the Guardian chooses to publish, which may have been changed by a journalist to make for better copy. The participants in the date are aware editing of answers may happen, I assume, and know these answers will appear in the public arena.  This isn’t about me thinking these two people are bad people – I don’t know them. I am sure, in real life, they’re lovely. I’m critiquing the answers, not the people themselves.  If you are the couple in this date, please do not take this personally; I don’t see the date in advance so my reactions are my first ones – you should know the drill by now. If you want to give your side of the story, get in touch and I will happily publish any rebuttal or comments you might have.

Photograph: Linda Nylind; James Drew Turner, both for the Guardian

18 Comments
Hello. For the first time in months, Blind Daters can feel the wind in their hair – and hopefully their...