There used to be a really interesting looking shop on Shepherd’s Bush Road in Hammersmith, the quirky middle-class kind of place with a mix of antique furniture, up-cycled old rubbish and stuff your working-class mum would’ve thrown away as old-fashioned in the ’90s. It looked like it could either be full of beautiful old treasures or a load of flea market tat, and I was always fascinated by it, but never went in. Next time, I said. Next time.

I walked by it again the other day. It was closed. For ever. The shop was totally empty; lettering removed from windows and the peeling sign above; light fittings dangling scrawny and bare. When I looked again, my eyes adjusting to the gloom within, I noticed there was one piece of furniture left: a great, imposing dark sideboard, like my grandmother used to own to store tumblers, shot glasses, letters she wanted to ignore and bits of knitting. It looked sad and undignified there all by itself. Everything else had been snapped up, claimed, but this solitary sideboard remained. I could’ve gone in at any time to look at everything else, but now all there was left for me to gaze at was the sideboard. Too late, I’d snoozed too long. That shop is online dating in a nutshell. The sideboard is you.

Today would have been that grandmother’s 90th birthday and what with that and Brexit and Pride this weekend I am feeling reflective and mortal and restless. It is a relief, then,  to turn my attention briefly to Simon, a 29-year-old rail operations consultant (?) and Caz, 32, an art administrator. Read what happened on their date (spoiler: bring caffeine) before I dip in and pull apart everything they say for no reason.

Simon is in blue and starts us off. Caz is kind of mauve.

That’s it, Simon, reach for the sky.

Again, goals about as aspirational as setting out to make a dog wag its tail.

Pretty. I love people telling me I’m good-looking, don’t you? I don’t care whether it’s true. Obviously because I am no longer a baby, I hear it less often, but my boyfriend does tell me I’m handsome at least three times a week and it’s quite the comfort. If I were a budgerigar, I’d never be out of the mirror, believe me.

I am honestly running out of GIFs for friendzoning. If you have any good ones, please donate – demand outstrips supply.

These are all quite good until the last one which, as regular readers will know, is something of a bête-noire for me. I’d rather trim Satan’s toenails than have someone recount all their dating horrors back at me, but who am I to judge what two grown-ups want to bore each other senseless with, over a free meal?

You do wonder whether Simon and Caz were sitting at the same table, as none of these subjects match up at all. It happens every week, two people talking out into the void.

Rush hour crushes: yes, I always find it a good idea when on a date with someone, who you’re friend-zoning at a rate of knots, to talk about lusting after strangers on public transport. “I don’t fancy you at ALL, but I did get really excited at the thought of banging some guy wearing tight grey joggers on the Piccadilly line  on the way here”. Gee, thanks.

This date sounds like quite the rollercoaster ride, doesn’t it? What next? Coughing into a napkin? Spilling a bit of water down the front of their immaculately ironed jerseys? Can’t wait.

Do you reckon Simon leaned over, just as Caz forked yet another floret into her mouth, and told her broccoli was “the colon’s broom”? I hope so.

I know you’re “only joking”, but I probably wouldn’t open with this one at your one-woman show at the Edinburgh Fringe, Caz.

We hear about eyes a lot in the Guardian Blind Date, especially from men. I am sure Simon is being genuine here, and on closer inspection, Caz’s eyes seem perfectly pleasant and serviceable – there are two, I assume they open and close, her lashes aren’t made of shit-covered scythes etc – but I wonder if men say this because they can’t say anything else. Women have very rightly taken back ownership of their bodies, and you only ever really hear that someone has a cracking arse if you’re amid a gaggle of gays, a group of women or, of course, on a building site dangling off the side of some scaffolding, leering at a schoolgirl. I just wonder whether the eyes compliment is a placeholder for something else.

What this means, sadly, is that whenever someone tells me I have nice eyes, I’m going to assume they’re dreaming about my dick or the way my T-shirt sits across my chest. That gets awfully awkward, especially when it’s an elderly male relative complimenting you on your peepers.

As best things about someone go, this is up there with “has a head” and “did not kill anyone in my presence”.

If this praise were any fainter, it would be my hopes and dreams for the future.

I wonder which members of her elite fan club Caz thinks Simon is worthy of meeting.

Somewhere out there, in various one-bedroom luxury apartments above a Sainsbury’s Local across London, Caz’s friends are wondering whether they’re the one who’d get an intro to Simon. I’d expect some incredulous texts this weekend, Caz.

Simon you are ADORABLE and there is no need to be nervous but can I please ask if you really ironed your jeans? I was always taught – I’ve no idea who by – that ironing your jeans was the squarest thing you could do aside from actually read and enjoy textbooks. So I hardly ever do.

100 extra points if he put a crease down the front.

Caz is a bit like one of those gentle comedies on Radio 4, and by gentle I mean you have to send out a helicopter and a full search party to find every punchline.

Is there a phrase more cheap, more infantilised, more Brexit than “school night” when you’re 29? Cheeky Nando’s, bantz, #lads, don’t mind if I do, “lashings of ale for me please, bar keep!”, chillax, listen mate, dirty burger, London I am in you, food baby, om nom, life hack, get in among it, get in my belly, man-crush, little glass of fizz on arrival, BOLLOCKS. I loathe it. 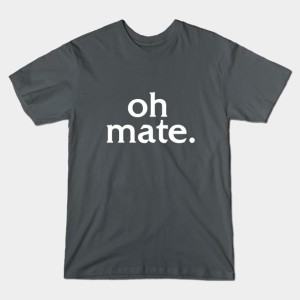 It’s part of the human condition, isn’t it – never saying what we truly mean? All the things left unsaid, the slights ignored, the tensions simmering like angry, desperate porridge on the hob, all because we can never truly say what we’re thinking. Oh, yes, there are potential Big Brother contestants queueing round the block to go on TV and tell you how straight-talking they are, but even those unpleasant show-offs aren’t being true to themselves. It’s performance, an act; they don’t mean a word of it. Because “telling it like it is” is not a thing. Only sociopaths would dare. We don’t say what we’re really thinking or how we honestly feel for a variety of reasons. The truth really does hurt, and we care too much about our fellow humans to see them upset. Sure, we can blow them to pieces in wars and murder them for their mobile phone or for having different politics, but few of us really want to make another person cry or feel uncomfortable. Most of the time we ourselves don’t want to admit the truth either, so keep it within. And, more obviously, if we went round blurting out what we thought all the time, we’d spent the entire day in fist fights with rude checkout operators in that Tesco on the Strand. The truth is apocalyptic – let’s never speak of this again

And this is why we have two people, who didn’t fancy each other and had a perfectly pleasant but ultimately directionless and pointless evening, saying what they’re saying above, instead of “everything”.

They both score each other an 8, which is very polite and sums up the entire feel of the date, really. Not awful, very polite, but sexless and devoid of charm or light.

But will they meet again? Will Caz get an opportunity to try out that exciting new standup material she’s prepping for Montreux? Will Simon be getting out his Rowenta and pressing his best chinos any time soon?

Note: All the comments I make are based on the answers the Guardian chooses to publish, which may have been changed by a journalist to make for better copy. The participants in the date are aware editing of answers may happen, I assume, and know these answers will appear in the public arena.  This isn’t about me thinking these two people are bad people – I don’t know them. I am sure, in real life, they’re great. I’m critiquing the answers, not the people themselves. If you are the couple in this date, please do not take this personally; I don’t see the date in advance so my reactions are my first ones. And I think people who iron their jeans are 💯, not squares. If you want to give your side of the story, get in touch and I will happily publish any rebuttal or comments you might have.

Another note: There will be no Blind Date blog on 16th July. I’m at a wedding in Paris. I may never come back.

Photograph: Felix Clay, David Levene, both for the Guardian

16 Comments
And, lo, it came to pass that as we entered the 700th week of lockdown or whatever we're calling this,...

18 Comments
I'm sure we can all agree it's been quite a week. I think even without everything that's been going on...