I don’t mind selfie sticks. I think they get a bad rap. It’s so drearily predictable people would moan about them, too, isn’t it? I heard someone the other day say that selfie sticks were “end of civilisation as we know it”. Not the refugee crisis, or war, or transphobia or Hollyoaks, but selfie sticks.

Even Brooklyn Beckham – whose every word I hang on, believe me – has come out against them in his iconic guide to Instagram that had my eyes rolling so hard they played the tune to his mum’s opus Not Such An Innocent Girl.

Why we can’t get our heads round the fact people want to take photos that include themselves is a mystery to me. It’s a stick. It’s no different from a delay-timer on a camera or using a tripod. Why shouldn’t you be in your own photos? Nobody else is going to take pictures of you.

Last week I went to a social gathering and was asked if I could take a group shot. I had to stand on a chair to get everyone in. I looked and felt stupid, and everyone could see up my T-shirt. And then someone arrived with a selfie stick and everybody had loads of fun posing and frolicking with people they’ve never shared a photo with before.

We devote a lot of energy to moaning about selfie sticks and the people who use them, and we need to divert this passion somewhere else. There are so many more deserving recipients of our ire and derision.

Here are just a few:

1. Loud people on coke
We’ve all sat in a bar at the next table to those awful, loud people on coke. They think they are hilarious, that they’re being oh-so-sneaky trundling off to the bogs every two minutes. Most of us have probably even been those people.

Congratulations on being ripped off and a big well done on your substandard class A drugs and bravo for becoming even more boring than you were before you rammed that glorious 75% glucose crap up your nose. Please pipe down. And stop saying “beerage”.

3. That date who’s just gone gluten-free and wants to tell you how bad bread is for you
Usually while you’re about to jam a big chunk of pain de levain in your gob.

5. Metrospreading
The trouble with manspreading was its restriction to men. Women, and other men who sit like normal people, understandably felt left out. Hooray, then, for Metrospreading, the antisocial commuting pastime that dickheads of any gender can enjoy!

To take part, simply get on public transport – preferably at the busiest time of the day – brandishing a newspaper. It doesn’t have to be the Metro but they’re oh so handy. Then, once packed in nice and tight or parked on the last seat on the train, open said Metro as wiiiiiiiide as you can. Extra points if it touches the face or arm of the person next to you.

Don’t apologise; it spoils the moment. If you’re extra sadistic, cast the odd Lady Di glance over at your neighbour and watch in glee as his or her face contorts in simmering rage and soul-crushing powerlessness.

6. Wandering around Borough Market with a glass of prosecco in your hand, gushing at the free samples of chilli chorizo…
…yet sneering at young people drinking blue WKD in the street. You are the same.

Your drink may be in a tall glass and have come at an outrageous price, but you’re just as much a street drinker as they are, baby. You’re not cool. You’re just hopelessly upper-middle class.

7. People who haggle over bills in a restaurant because they “didn’t have a starter”
However, even worse, by a country mile, are…

8. The people who fill their faces with the most expensive things on the menu and drink vats of wine knowing the bill will be evenly split at the end of the meal

9. People who think Madonna is too old and should “give it up” yet got misty-eyed about the Queen being old and still working

10. People visiting London for the weekend
who say things like, “Oh I could never live here” and “It’s just too busy; too much going on”. Please allow me to pay for your Uber to a train station or airport of your choosing.

12. People who don’t know how to use self-checkouts but insist on using them anyway
It’s OK if you don’t get how they work, or understand there’s a process you simply must follow to avoid everything going horrifically, cataclysmically wrong. Tec, it’s not for everyone.

But to wilfully queue at them, confident “this time” is the one, when you’ll crack it – even though you know you’ll have to get the assistant to scan everything for you, while the rest of the queue wishes you were dead – is evil, frankly.

Even the ignominy of having to call over the assistant for the sixth time, as the machine bleats “Please place the item in the bagging area” at ear-crushing decibels, doesn’t stop them.

13. Living statues
There is a man on the south bank who paints his face to look like a pug and then sits in a box all day and expects you to throw money at him.

I’m thirsty. What the hell is your damage?

15. That posh pronunciation of “negotiate” that has what sounds like an “s” in the middle

16. The champagne bar in Westfield, White City
Can you imagine Alexis Carrington pulling up a pew in this joyless collection of worktops amid vague promises of canapés and enquiring about the vintage Krug?

No, of course you can’t. You should never drink champagne any way, or anywhere, Alexis wouldn’t.

17. Bowls of salt and pepper on restaurant tables instead of proper mills or shakers 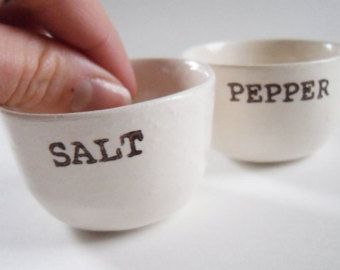 I know this is an aesthetic thing or urban or rustic or whatever, but those dishes of salt where you have to put your fingers in, grab a few rocks of salt then sprinkle them over your food are disgusting .

Do you know how many people there are out there who don’t wash their hands after going to the toilet? Or pick their nose and EAT it? Fucktonnes, that’s how many. And they all sat at your table before you. I can’t believe we haven’t taken to the streets over this issue.

More like this:
– The real basic is you
– Take a long hard look at your selfie
– The Selfie
– 29 social media truths we’d never say out loud
– 11 men you really don’t want your boyfriend to follow on Instagram

National Coming Out Day: How not to react

no comment
It's National Coming Out Day! Closet doors up and down the country are being wrenched off their hinges and brand-new LGBTQ younglings...

National Coming Out Day is all yours – make it count

no comment
It's National Coming Out Day, the day when the collective force of a zillion closet doors being thrust open is...

How to start again

3 Comments
When somebody dies, they take on a kind of mythical quality. Did they ever exist at all? Yes, you have...

Subscribers to my regular mailout receive new writing by me before anyone else. It’s not a newsletter; I never have any news. Just writing. Click on this paragraph to sign up.
%d bloggers like this: