I swear to God the Guardian must have only two different men they keep in a cupboard and wheel out for these dates. Tom feels like the 109th “gingery man with a beard turned to the side and laughing into the void” we’ve seen. And this is the second Tom in a row. We are overrun with Toms.

Anyway, today’s is nice enough mainly because a) they have similar jobs, b) give quite interesting answers and c) get on.

That’s not to say there aren’t still a few clichés I can take my scythe to, of course. But if you’re looking for the usual bloodbath, you may want to turn away now.

Read how Tom, 33, a radiologist – it says “senior radiologist” in the column but this is a magazine not LinkedIn, for crying out loud – and Lucy, 30, a medical student, got on during the date before I get going.

Have you noticed how today’s contestants have admitted to being in their thirties unlike every other couple recently who simply MUST be over 30 yet insist they are “27”? Either the photographers are having a good day or the hospital these two work at doles out a magic elixir in the canteen, but this pair seem fresher than Rebel MC’s trainers (’80s reference).

Their “What were you hoping for?” answers are predictably drab – “a fun evening”, “minimal awkward silences” but that’s an issue with the question rather than the daters. Let’s press on.

I love appropriating what my grandma – or my nana for that matter – might have said because they were both wise old ladies with an array of sharp putdowns that they wielded like nunchucks.

“Nice Face” is perfect gran-speak because a grandma would never call anyone handsome or goodlooking unless he was her very own grandson or a famous person on TV.  Those are the rules of being a grandmother – the men in your family are the most gorgeous studs in the world and all other males look like Plug from the Bash Street Kids and that’s just the way it is. “Nice Face”, though, you can do. It’s allowed.

You see this is where talking shop is actually interesting. I imagine “things you’ve seen in X Rays” is their version of “worst person you’ve interviewed” for me.

If you’re wondering which innocent, throwaway remark I am going to latch onto like a bulldog ripping a copy of the People’s Friend to shreds this week, it’s coming up now.

Running. Oh God. Running bores. The curse of getting into your thirties and realising you *can* be arsed doing some exercise after all so maybe you’ll try running because that’s easy. You then talk about it nonstop.

I used to run and I was terrible for this. I would even mention, on dates, actual routes I ran. If my date looked too bored, I would try to pull it back by getting up from the table and walking over to the bar, and thus away from them, so they could check out the benefits of running on my behind. It worked pretty much every time.

Tom, here’s a tip: “nodding politely” isn’t a good thing. You don’t want your date to be nodding at you like Prince Harry meeting a renal ward in Leicestershire. You want your date to be throwing her head back in laughter and imagining you pressing them up against the doorbell as you kiss goodnight. Nobody ever got banged because they were good at making people nod. 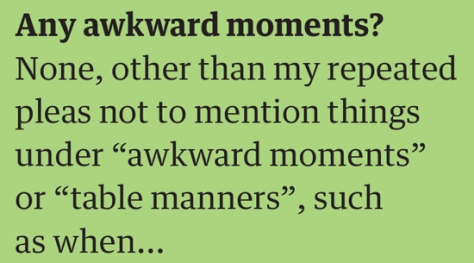 Lucy gets this. She knows she’s going to be in a magazine and she doesn’t want to be stitched up, so is on full damage-control alert. I’d be like this. “So that part where I droned on about my running route round Clapham Common – probably best not to mention how dull that was when the journalist asks, right?”

But what did she do?! I must know.

If there is one pet hate I have about restaurants – I mean, I have over 700 but we can’t be here all day – it is the amount of crap they put on tables, no matter how much table space there is.

A vase with a miserable looking gerbera in it, huge salt and pepper mills, ten-feet tall menus or promotional cards or invitations to join their “artisan olive oil club” so you can’t see your dining partner, wine and water glasses that they whip away as soon as you ask for a beer, HUGE cutlery, napkins you could cover a dead whale with. No.

So I fully sympathise with Lucy’s plight, much as I do Tom’s – it’s nice to be a gentleman, but if your date smashes a vase, it’s got to go in the magazine.

Notice how Tom doesn’t say whether Lucy’s table manners were bad or good, just that they shared plates.

I have a feeling Tom is like me – a vehement anti-sharer when it comes to food. He wants the world to know that although Lucy managed to keep her mouth shut while she chewed and didn’t snort like a pig as she ate, she made him share food. Fingers in the dishes. Waggling forks about trying to get the last dough ball. Pretending you’re okay with them having that extra king prawn.

You can never be honest during a round of food sharing and it leads to resentment of volcanic levels. Don’t do it.

I don’t like it when they get the “three words” wrong. If someone described me in three words as “He’s from Lancashire”, I’d take it to mean they’d found me utterly dull, like a day without weather or a Wednesday episode of Coronation Street. Really nothing else to say but where I come from?! Really?

Also, I’m from Yorkshire so it would also tell me they obviously hadn’t been listening.

If I had long hair I’d probably twirl it round my finger now and giggle.

Tom, the easy way to solve this one is just shut the fuck up about running. She doesn’t think you’re a running nerd, she just wants you never to mention it again. It is catastrophically boring. Honestly. No more. Blog it, or something.

I will let Lucy off as she is a student and so technically she still has school nights. But if you are not a student and still saying this about weeknights you need to head to the mirror and have a long hard chat about how things are going.

Haha nobody has said this for ages – you can tell we’re back with the over-30 crew. This happens overnight doesn’t it? This transformation from not giving a fuck about hangovers into harbouring an almost prissy guilt for having one tiny glass of Pinot after 9pm. I miss shrugging my shoulders at life more.

I don’t know about you but these eights feel like nines to me. I’m not going to argue with people who work in a hospital though – I expect they’re used to trying to cut numbers to meet unrealistic NHS targets (lol politics etc).

Hmm these seem a little cold, despite the general feel of the date. Maybe they just need to keep things under observation, run a few tests and [other hospital analogies] and see how things go. I suppose medical staff are used to playing their cards close to their chest –  radiologists in particular would need expert poker faces.

Although I now realise she may have actually done this to shut Tom up about running (sorry Tom, it’s nearly over), Lucy wins this for smashing a vase.

Photograph: Frantzesco Kangaris; James Drew Turner, both for the Guardian

3 Comments
You know when you wake up and it's one of those blank days? One you know you won't remember? A...

5 Comments
Still January, then. Great. Nothing more to say on that, really. This week's hopefuls are Maria, a 24-year-old fashion PR,...

5 Comments
January. Party's over, clear away the gin, banish meat from your life, eschew dairy, sail oblivious past the chocolate aisle...

16 Comments
Do you remember, back at the top of the year, when our January blues were all but obliterated thanks to...

Subscribers to my regular mailout receive new writing by me before anyone else. It’s not a newsletter; I never have any news. Just writing. Click on this paragraph to sign up.
%d bloggers like this: