We’ve all got a clapped-out Vauxhall Viva parked on a meter outside so let’s not mess about.

Today’s willing victims tap dancing on the side of the cauldron of boiling oil that is the Guardian Blind Date column and the wrath of its readers are David, a 55-year-old physiotherapist, and Mary, 61, a teaching assistant. 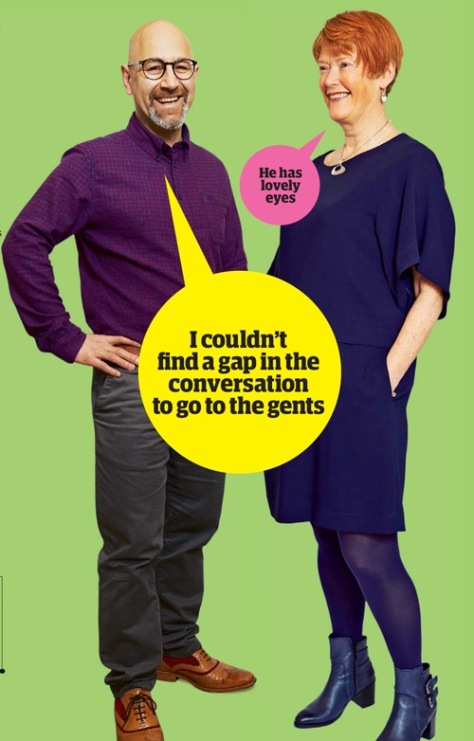 Read what happened on the date before we hold our nose, breathe in and dive into the deep end.

This is more common than you’d think. Not everyone skating precariously around the dating arena is looking for love, true or otherwise – it’s an exercise in self-assessment and improvement. This is exactly why I started dating. Would anyone be interested? Would I know how to talk to people who weren’t a) friends b) relatives c) shop assistants? Would anyone ever look at me and think “you’re gorgeous”?

You could stare at yourself in a mirror all day, guessing what people might think of you, or you could spritz on a bit of Tom Ford, floss your teeth extra carefully, and go and find out for yourself. Clean your mirror before you leave – in case you want to take any drunk, crying selfies when you come back.

While this may not be the most positive start, hoping for nothing can be quite a good idea. It’s pretty much the only thing you’re guaranteed from a night out with a stranger. Nothing. Bring on the bonuses.

Mary has the world-weary air of cabin crew stuck doing the Manchester–London shuttle for the last 10 years – bing-bonging the passengers about their seat belts in perfect deadpan, sticking her finger through every tenth mini-croissant just for something to do, to check she’s still alive.

“What about these?” said the cheery young girl in the optician, handing Mary a pair of bright purple specs. “These are quite jolly.”
It had been a long day. Mary took the glasses from her – the seventeenth pair she’d tried on – like she’d been handed a nappy by a stranger’s child in the toilets of a petrol station (just outside Widnes), and wearily tried them on.
She looked like a Far Side cartoon character, or an agony aunt on Lorraine who’d been a bit of a goer in her youth but had discovered grandchildren and quadruple gin-and-tonics. But they were better than all the matronly goggles and faux-ironic plastic “web-designer who dyes their hair grey despite only being 24” ones she’d been trying on before.
“I’ll take them,” she said, resolving to buy not one but two bottles of white zinfandel on the way home.

I think if someone thought my glasses represented my personality, I would shimmy under an oil tanker – while it was moving. Incidentally, I have exactly the same glasses as David. Whether this is an insult to one, neither, or both of us, I’ll leave you to decide.

This is nice. I’ll take David’s “illustrious” here to be slight sarcasm, on which he’s taken a lead from what Mary was telling him. Otherwise it sounds rather like he’s taking the piss and with those glasses, there’s no way David could be such a shady bitch. It’s just not in our nature.

I’m not sure how I feel about a 55-year-old man not knowing how to tell someone he needs to go for a wee. Did Mary not pause to drink any wine?

Do you know how there are some things you know you won’t like, without trying? Holidays in the Falklands. That new flavour of Findus Crispy Pancakes. Emmerdale. Mine is fennel. It’s ugly, it smells funny, and even before I accidentally tasted it once at the dinner party of a friend who took “is there anything you don’t eat” to be his cue to establish a career in aversion therapy, I knew it wasn’t for me.

Two “impeccables” that got a makeover on This Morning. Next.

Whenever I hear the phrase “boundless energy” I think back to when I was a child and 85-year-old women who had joined the local gym would pop up on the local news programme, Calendar, to show they were “young at heart”. They almost always made them wear godawful leotards and Reebok classics as they filmed them glacially lifting a pink dumbbell and giving a gummy smile to camera. Seriously, there was about one a month.

It also reminds me of Mary Brazzle. If you do not know of this amazing sketch, avail yourself of it now.

So good a listener he almost wet himself, Mary, but don’t let that put you off. And more about these glasses! I wouldn’t be surprised to learn that today’s date was sponsored by SpecSavers. (You can’t get those glasses at SpecSavers, btw. Very reasonable online, though.)

DEDICATED like a plaque on the wall of a leisure centre, to commemorate the site of the world’s oldest chocolate vending machine.
FUNNY like that smell on the Bakerloo line platforms at Waterloo.
BROAD-MINDED like absolutely nobody in the comments underneath a piece in the Guardian, ever.

CHATTY like someone who talks so much he would rather carry on chatting than relieve himself.
CHARMING like Kaa in The Jungle Book.
CHEERFUL like the man behind the counter of your local off-licence, pretending to like you because you’re the only person to buy booze that’s outside the “4 cans for £5” deal.

Single in your 20s or 30s? Then either take heart, or run into the hills with a tea-towel over your eyes, at the realisation you can get to the age these two are and still not really know whether someone likes you or not. It’s going to be a long forever, isn’t it?

The other week, I was at a work event and someone I’d just met asked me, “If there was anything you could say to me as a 19-year-old, what advice would you give?”

My main tip would be “Don’t ask life advice from 41-year-olds you don’t know”. Any 41-year-old, in fact. Anyone older. They don’t know any better, they aren’t wise – they just got here before you, with a larger catalogue of mistakes behind them than you have. The idea we should have it “all figured out” by some magic age is not only nonsense, it’s extremely dangerous and patronising. I’m still finding my way, we all are –it’s just that I’m doing it with eye bags and greying hair and acid reflux instead of youthful effervescence. I didn’t say that to her, though. She would grow up and come to that conclusion herself anyway.

My advice, which I delivered very kindly because she was very sweet and had flawless skin which I couldn’t take my eyes off, was: Don’t assume advanced age brings any wisdom whatsoever. Worry less. You’re probably not studying enough, so make sure you do. Perhaps  my ACTUAL advice should have been to ask those you admire for guidance, not people who just happened to have been alive longer.

Anyway, then I remembered I had an online advice column, and someone else might have told her, so that’s probably why she was asking. My memory’s not what it was. Oops.

Well, this is very encouraging, isn’t it? What would you score someone who held their pee in for you?

A strong 7. Seven. How strong is this 7? As strong as your bladder, David? I mean, we all know what a 7 is. It’s a gentleman’s 1. Maybe – and this is me giving you the benefit of the doubt, David, because we are Tom Ford spectacles buddies, so obviously you are a great person because we are ALL the same – you’re old-school and don’t believe in over-marking. But if Mary, who has had an “illustrious” career in education, remember, and thus will be an absolute expert in marking appropriately, scores you higher than you scored her, what does this say about you?

So we’ve come to the end of the line.  It has been a fairly uneventful journey, to be honest. They haven’t given me much – my main takeaway from the whole thing is that their favourite music sounds like it would be played at a barbecue in 2004, David’s bladder was like a hot air balloon by the end of the night, and Mary loves alliteration but not believing someone actually might find her interesting for a whole evening. Will they finally show their hand, and a little enthusiasm for each other?

Photograph: Christopher Tomond for the Guardian

Disclaimer: The comments I make are meant to be playful and humorous and are based on the answers the Guardian chooses to publish, which may have been changed by a journalist to make for better copy – Lord knows they need it sometimes. Anyone participating in the date would usually be made aware of this editing process before taking part. If you are the couple in this date, please do not take this personally. It’s about what you say, not who you are. If you want to give your side of the story,  or send in your original answers, just get in touch and I will happily publish any rebuttal or comments you might have.

11 Comments
As Steps once wisely trilled: 'Summer is over and all we are is apart', except, luckily, we don't have to...

9 Comments
August! The cigarette-end of summer! Last chance to find a regular ride before magazines start banging on about cuffing season...

9 Comments
Remember when Katy Perry sang, in her million-selling hit Firework, 'Do you ever feel like a plastic bag?' At the...